For the purposes of this blog post I have taken a series of photos of a block sculpture to play with loosely describing a few steps in my creative process.

Let’s start at the beginning:

Well, that’s not really the beginning is it? The beginning would just be an empty desk – or in my case a cluttered desk that had to be cleared off for the purposes of this adventure. Here I began modestly with a few simple blocks which represent ideas or movement phrases or even dancers in a room together. Already there is a semblance of form and decision making. Beginnings matter and yet they are also somewhat arbitrary: why explore this concept now with these dancers in this studio? Possibly because it is the perfect thought at the perfect time – more likely because it’s an idea that feels interesting and these are able-bodied people who were free on Wednesday evenings from 7-9:30pm.

For the purpose of this project I wanted to start with smaller blocks because they less immediately limiting. 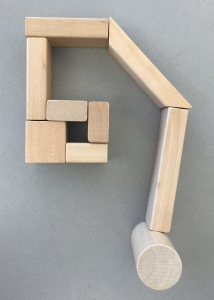 We expand from the initial decisions and already the blocks are feeling so…inert. But they are doing their job as an exterior reflection of all the activity and decision-making that is happening behind the scenes. This portion of the sculpture was actually pretty quick to build. I decided to use a lot of long, flat blocks and start a sort-of spiral. Sometimes the right decision just shows up and you go with it. 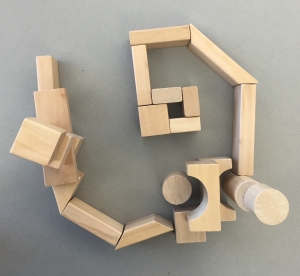 This section was MUCH more fraught – should I stay with the spiral or branch out? How do I integrate depth into an overhead visual field? Should I scratch it all and start again (this was my third attempt already)? I persevered and found solace in the calm trial and error of placing, adjusting, stacking and reorganizing these blocks. It’s a similar headspace to the one I have when I’m playing around with movement that already exists in phrase form – placing sections on different bodies in different spaces, attempting to discover which information needs to come first.

As you can see, the depth caught my attention. While I loved the simplicity of the beginning I began to crave texture and contrast. Just before I stood up to take the photo I realized that I had four little cylindrical blocks sitting to the side and they became my inhabitants. Those quick, last-minute decisions are so seductive but they seem to only happen after a certain amount of time and effort has been expended.

I slept on it. When I showed up at the office at 7:45am this morning I felt like the piece was still missing something. Again, I tried taking things off, fiddling with the little cylinders in the middle and finally added some shape and contour to the end and edges. There was kind of a ‘duh’ feeling when I placed the hat-shaped block at the end – too obvious? I went with it anyway.

There are many ways in which comparing block-building to dance making is inherently flawed, movement being the primary one. But condensing a process that usually takes months or even years into a 24 hour adventure was actually enjoyable. In my History, Theory, Literature of Choreography class with Bebe Miller we’ve been reading, and talking with with, Susan Rethorst – a choreographer who believes in trusting one’s own Inwit or innate, personal sense of decision making in art form. This is a relatively easy concept to explore with block-building and much more complicated for me in this studio where the blocks are human beings or ever-evolving movement material and the prospect of a performance with audience adds a different tone to the decision making. Which is fine with me.

2 thoughts on “Making a dance (in blocks)”